Whatever happened to … the Bradley Pioneer?

I recently received an e-mail from Buck Camp, who is the son of the late J. W. “Buck” Camp, Sr., longtime Mayor of Bradley about 40–50 years ago.  Buck asks:  “Does anyone know if any issues of the Bradley Pioneer newspaper, edited and published in the 1960s by George Bell … are in a library collection or if any still exist?”  The short answer to Buck’s question is an emphatic “Yes.”  And, like many parts of Bradley’s history, therein lies a tale…

George Bell, shown below in 1971, published the Bradley Pioneer from 1960 to 1976. The only two photographs I could find of George are not very good photos.  One is slightly out-of-focus and the other suffers from badly deteriorated 35mm slide film. 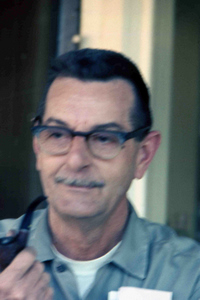 For almost all of the sixteen years the Pioneer was published, George prepared it on a Linotype machine.  The picture below is of very poor quality, but it shows George at work in 1968 on that cumbersome apparatus. 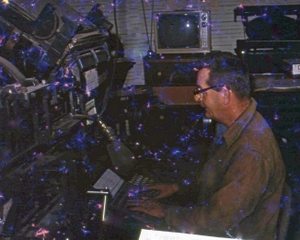 A Linotype machine is just that.  The operator types in one line of type at a time.  The machine forms a mold for that line of type.  The machine then pours hot lead into the mold, which cools to make the actual print that is struck by the ink of the printing press.  Once done, the lead goes back into the hot lead pot to be melted and reused.

Shortly after George ceased publishing the Pioneer in 1976, the late Dr. John Ferguson, Executive Director of the Arkansas State History Commission, visited him.  Dr. Ferguson asked George if the History Commission could microfilm the issues of the Pioneer that George still had.  George replied that he was willing for the issues to be microfilmed, but that sorting sixteen years of issues would be next to impossible.

I heard about Dr. Ferguson’s visit and its unsuccessful outcome, and volunteered to help George in the sorting of the back issues of the paper.  Perhaps the word “volunteer” isn’t entirely accurate, because I did demand one form of payment for my efforts.

George kept his back issues of the paper in the back room of his building.  Sixteen years of issues had been stacked haphazardly during that time into daunting piles, many of which were even taller than I am.  Apparently, George would place a few back issues of each week’s edition onto whatever pile was smallest.  This went on for sixteen years.  It was a rather large room, roughly 16 feet by 20 feet, and it was crammed with back issues.

For two very long days, George and I, with an assist from Ricky Kennedy, sorted back issues.  We got some saw horses and sheets of plywood and made makeshift tables for sorting.  We first sorted papers by year of publication and then by issue number.  Of course, most of the issues had many more copies than we needed.

It turned out that George had saved all but 8 to 10 issues of the Pioneer published during those sixteen years.  Those were boxed up and Dr. Ferguson later picked them up, took them to Little Rock for microfilming, and returned them to George.  My “price” for assisting George in sorting the back issues was that he would give me the second most complete set.  There were about a half-dozen issues for which only one copy had been saved, so my set was missing around 15 issues total.

I later donated my set to the Southwest Arkansas Regional Archives, known as SARA, in Washington, Arkansas.  To the best of my knowledge, they are still there today and open to inspection by the public.  SARA’s web site is www.southwestarchives.com.  SARA is now a branch of the Arkansas State History Commission.

When I was last in the offices of the Arkansas State History Commission (www.ark-ives.com) in Little Rock about three years ago, an attendant showed me the four microfilm rolls of the Bradley Pioneer.  At that time, copies of each roll could be purchased for $75 each.  Like everything else, though, I suspect that the price has increased since that time.

This entry was posted in People, Photos--old and tagged Bradley Pioneer. Bookmark the permalink.