This past Friday evening, June 25, 2010, approximately 200 citizens and many of his fellow law enforcement officers gathered in the Bradley Elementary School Cafeteria to honor Bradley’s own Arkansas State Police Sgt. John Bishop.  John is retiring from the A. S. P. effective today (June 30, 2010).

John is a 1969 graduate of Bradley High School.  John joined the Arkansas State Police on May 2, 1974.  Before being stationed with Troop G and thus able to live in the Bradley area, John was stationed at Little Rock, Hot Springs and Camden.  He has worked in the Criminal Investigations Unit since 2000.

At the dinner, John and his wife, Patsy, were provided rocking chairs (below).  Patsy used hers; John didn’t (below). 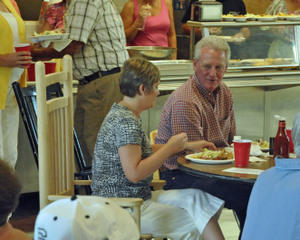 One of the more interesting parts of the evening was the presentation to John of a plaque by Officer Jay Perry of the Louisiana State Police, who has worked with John on interstate investigations (below). 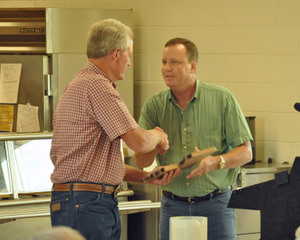 Two local friends of John who spoke were Kelly Kelner (below) and Vickie Paige (below, with Emcee Richard Estes). 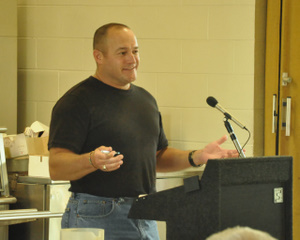 At the conclusion of the evening, John briefly addressed those present (below). 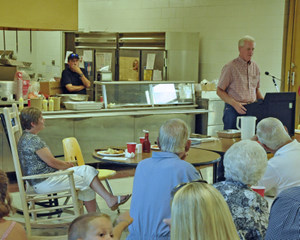 Finally, no report of the evening would be complete without mentioning the presence of John’s parents, Mr. Dick and Mrs. Marjorie Bishop (below). 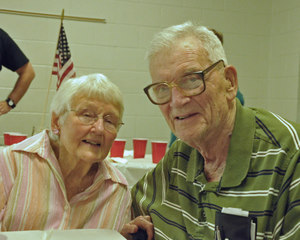 This past Saturday, June 12, 2010, the Bradley High School Class of 1970 gathered for a class reunion on the 40th anniversary of their graduation.  Below is a photo of those present.

Faces in the above photo are obviously difficult to discern, so here are two zoomed-in photos of the participants. Somehow Jerry Pickett and Odis Weems, the two gentlemen at the right of the group photo above, got left out of the close-up photos below. 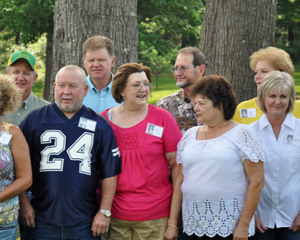