In 1994, a statewide newspaper ran a picture which bore an inscription of “Town Site of Mackinaw, Arkansas.”  The picture showed a large group of people gathering around a single structure which was apparently intended to be a house.  The newspaper had no idea where Mackinaw was and asked readers for help.

The short answer to that inquiry is that Mackinaw is located mostly just west and north of where Arkansas State Highway 29 crosses the Louisiana state line.

The picture in the newspaper prompted Frank M. Cochran, Jr., to write the following:

Mackinaw was a land lottery scheme that took place sometime between 1914 and 1916.  The chances were sold in Indiana.  Each entrant was promised a parcel of land.  The size of these ranged from a city lot to a full section (one mile square).  Of course, most got one of the many city lots which were worthless.  A town called Mackinaw was platted and was filed in the Lewisville courthouse.  The town was located in Section 10, Township 20 South, Range 25 West.  The entire promotion covered ten sections, plus or minus one or two.  This land is located mostly west of the Cotton Belt Railroad and is bordered on the South by the Arkansas-Louisiana state line.

The plots were mostly divided into 2, 5, 10, and 20–acre blocks.  There were a few larger with the grand prize being a full section.

Mr. J. G. Allen, Jr., a native of Indiana who was living near Bradley, was hired by the promoters to oversee the clearing of some of the streets and to build three houses.  This was done during a winter when he was not busy on the Red River bottoms farm owned by his father, an attorney who lived in Washington, Indiana.  When the day of the drawing came, he supervised the feeding of the visitors.

A special train ran from Indiana to Mackinaw and brought a number of people in several carloads.  The booze flowed freely.  When the train stopped in Bradley, 5 miles to the north, several of the locals jumped into the baggage car and each grabbed a gallon jug of whiskey.  My father [Frank M. Cochran, Sr.] worked in a store [Holland Hardware Co., see post of 10/8/07] less than a block from the train station and saw this happen.  Mr. Allen’s daughter, Mrs. Marjorie Bishop of Bradley, said Mr. Allen told her that he thought that the people got so drunk that most didn’t care what size piece of land they drew in the lottery.

An oil well was drilled and “salted” with oil to make the people think that they would get oil checks.  During the 1980’s oil was discovered along the south edge of Mackinaw and there were some good wells.  This was at a depth of 6,000 to 12,000 feet, much deeper than the original well.

During the Great Depression, most of the plots of land reverted to the State for unpaid real property taxes.  At that time, State-owned land could be bought for $1 per acre.  When the Land Commissioner began to sell it, some people are said to have given a little extra and got more than the ones first in line.  Very little of the land is still in the hands of the original owners.  The ones who held on to it have largely sold it to the large timber companies or local dealers in such land.

I am 73 years old and have lived in Bradley since birth.  I can remember seeing one or more of the Mackinaw houses still standing after Highway 29 was graveled in 1929.  It crossed the railroad just about 200 yards from those houses.  The houses soon disappeared, either by burning or by being torn down for the lumber in them.  I do not know if any were ever occupied.

The picture [in the newspaper] must have been made on the day that the special train was here for the drawing.  I do not think that there would ever have been that many people there at any other time.

Below is a photo of the plat of Mackinaw on file in the Lafayette County Circuit Clerk’s Office.  Notwithstanding the fact that it is located in a low, poorly drained, remote rural area, it has a Byzantine complexity worthy of downtown New York City.  The Cotton Belt Railroad is the slanted line on the right side of the photo. 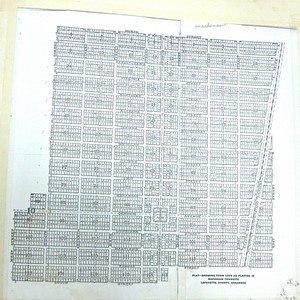 This entry was posted in Documents, Land Ownership and tagged Mackinaw. Bookmark the permalink.