The post on this site of 3/4/09 introduced the reader to Bradley’s most notorious unsolved mystery:  the murder of Tom Dooley in 1910.

Glynn McCalman, in his book Bradley Connections, has written an excellent overview of what he calls “The Dooley-Cryer Tragedy,” and has graciously consented to the reprinting of part of it here. His use of the word “tragedy” is especially apt.

A community-shaking tragedy occurred at Walnut Hill in 1910 which devastated two families and affected the whole township and beyond.  Because of its highly emotional nature and volatile repercussions it remained for several decades a topic for conversation only in hushed tones, and generally only among trusted family members and friends.  Precisely what happened is difficult to ascertain because those most affected reported it differently.  The following version represents what we were told by persons who were neighbors of the two families when it happened.

Tom and ‘Frankie’ Dooley were next door neighbors, good friends, and relatives (via a marriage of Duty and Dooley) of Robert and Mary Cryer.  The fine old Dooley home was on the west side of the Old Shreveport Road, and approximately 125 yards north of (now) Highway 160.  Fifty yards further north lived the Cryers.  The adults enjoyed each other’s company, and their several sons were constant playmates as they grew up.  But the friendship was totally dissolved as a result of a single event and circumstances surrounding it on November 15, 1910.  Most neighbors agreed that the problem related to Tom Dooley’s role as a deputy sheriff.  Acting in that capacity one day, Dooley felt it necessary to confront (if not arrest) one of the Cryer sons for an alleged legal infraction.  As a result serious tension arose between the families.

One frequent, if not daily function of Dooley, was to bring the mail from Bradley to the Post Office at Walnut Hill.  While making that delivery on the fateful day he was shot by some unknown person, and died as a result, ….  No one was ever arrested for the murder.

The escalation of passion between the two families eventually prompted Frankie Dooley [Tom Dooley’s wife] to send her sons away from the community to avoid further violence.  Although for several decades many felt that one of the Cryers had killed Dooley, a half century after the event, a report was circulated that on his death bed, another man, not a Cryer, confessed that he had actually done the shooting.  In less than a year from Dooley’s murder, Bob Cryer was also murdered.  And for fear of more violence, Frankie began to take steps to protect her sons by sending them to live with distant relatives.

The contemporary newspaper article in the post of 3/4/09 on this site states that R. B. Cryer was “retained” by Sheriff Barham.  Glynn’s piece above states that there was never an arrest for Tom Dooley’s murder.  Both are in all probability correct.  I have been unable to find in the records of the Lafayette County Circuit Clerk any mention of anyone being indicted or charged with Tom Dooley’s murder.  When the contemporary article mentions that R. B. Cryer was “retained,” it probably refers to a procedure commonly referred to today as someone being detained for questioning.

On the other hand, the Lafayette County Circuit Clerk’s records do contain some clues as to the aftermath of Tom Dooley’s murder and the murder of R. B. Cryer about one year later.  After I’ve had time to sift through some of those records, a subsequent article or articles on the Dooley-Cryer affair will follow.

Below is a photo of the tombstone (on the left) of Thomas J. “Tom” Dooley in the Conway Cemetery. 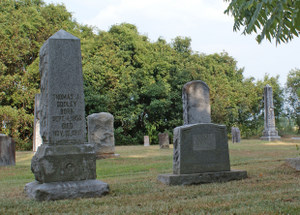 This entry was posted in Crime. Bookmark the permalink.