Shown below are four black-and-white photos taken in “downtown” Bradley, apparently in the 1950s.  I don’t know who took these photos, but they were apparently taken on the same roll of film.  The photos are actually copies of copies and, therefore, rather grainy, and one is slightly out of focus.  After each of these photos is a color photo taken from approximately the same location and angle on June 15, 2008.

The second photo shows a group gathered around a ladder, perhaps, judging from the jackets some are wearing, putting up Christmas lights.  Again, the building in the background must have been demolished not very many years after this photo was taken. 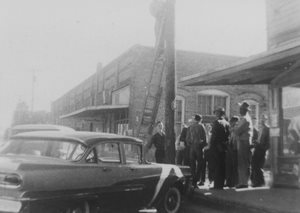 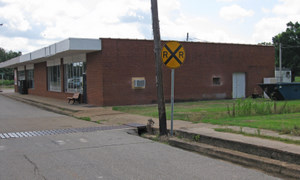 The third photo shows the view from just east of the railroad depot on Fourth Street/Highway 160, looking west.  It also shows what was then the front entrance to the depot.  The building in the background was demolished in 1978. 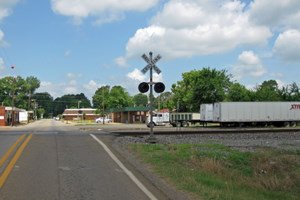 The fourth and last photo shows the building in which George Bell later published the Bradley Pioneer for 16 years.  It was demolished in the mid-1980’s.  The Bradley Public Library was located in the right side of this building for many years.  The sign on the side of the building says, “Jones Plumbing and Electric.”  To the right of that building is Alvin Owens’ barber shop. 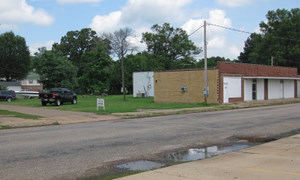 These photos remind me of a book that, as a boy, I spent literally hours poring over at the Bradley Public Library.  It was a large (perhaps 24 inches by 30 inches) scrapbook or photograph album put together by the Bradley B. & P. W. Club.  It contained many, many wonderful photographs of Bradley as it appeared in the 1950s.  I’ve often wondered whatever happened to that scrapbook.  If any of the readers of this site know of its present location, I would be most interested to learn its whereabouts.

Several previous posts have featured photos from Fourth Street (now Highway 160).  The following photo shows a gentleman whose identity is unknown, but who is obviously very well dressed, standing on Fourth Street in the 1910s.  That date is reasonably certain because of the album from which the photo was taken.

This photo is roughly contemporary with the photo on the header of this site and with the first photo in the 1/30/08 post which shows two people standing at the south entrance to the railroad depot.  The buildings in the background face the railroad, as did most of the early commercial buildings in Bradley.  It is difficult to discern, but there is no structure at all on the half-block behind the building at left, which would be where Coker Hardware is now located, and upon which a row of several buildings was later built and also demolished.

This photo is an almost 180–degree opposite view of Fourth Street from the photo in the post of 2/11/08.  The tinted photo of the kneeling man and his dog in that post was taken about 20 years later than this photo, however.

Note the orientation of the buildings on both the north and south sides of the street toward the railroad, and not toward Fourth Street/Highway 160 itself, as they later did or as the structures which replaced them did.  The street has obviously not been paved.  The railroad depot can be seen in the distance, just to the left of the kneeling man.

While this may appear at first glance to be a color photograph, it is not.  It a black and white photo which has been “tinted,” a procedure common at that time.  In the interest of full disclosure, however, I have removed some writing that appeared in the shadows on the right side of the photo.  The essential nature of the buildings shown and the man and the dog he is holding have not been changed, though.  I’m not entirely certain of the man’s identity, so I won’t give a name.

Below is a photo taken from approximately the same place and angle in the late afternoon of February 10, 2008.