Feb-1957.  The Scouts distributed the posters of the Special Clean Up drive sponsored by the B & P W Club.  The Scouts celebrated the 47th Birthday of Scouting in the U S A with an open house and family night dinner at the American Legion Hut.

June-1957.  Seventeen Scouts spent one week in June at Camp Pioneer, near Hatfield, Arkansas.  Two Scouts were inducted into the Order of the Arrow at this Camp.

During the year of 1957 a total of 300 Boy days and nights were spent in camping.

Thomas Burks and Don Barnett are the two Boy Scouts that attended the National Scout Jamboree in Valley Forge.

The Boy Scouts are sponsored by the American Legion.

The American Legion Hut [shown below] where the Boy Scouts hold their meetings.” 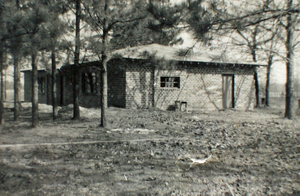 The American Legion Hut had fallen into disrepair and was demolished several years ago to make way for the construction of a baseball/softball field.

A previous article on this site has mentioned that George W. Bell was Scoutmaster of Troop No. 72 at one time.  In the early 1960’s, when I was of Scouting age, Glen Ruth was the Scoutmaster.  Perhaps some reader(s) can recall the names and approximate tenures of other Bradley Scoutmasters.

I was one of a very few people who attended the ceremony at the Legion Hut where Mack Jackson was awarded the rank of Eagle Scout, so I have personal knowledge that Bradley had at least one Scout to reach the highest rank in Scouting.  Perhaps some reader(s) have knowledge of others to accomplish that feat.