A Tale of Two Sanctuaries

Below is an image of the 1903 sanctuary of the Bradley Baptist Church which appeared on the church bulletin on the occasion of the 90th anniversary of the Church in 1992.

To dedicate a sanctuary built by our hands to the total honor of God, the Father, Son and Holy Spirit.

Space limitations prevent a full transcription of the program of the morning worship service on that day, but the individuals listed on the program were as follows:  Prelude by Mrs. T. E. Cason; Greetings From Hope Baptist Association by M. T. McGregor; Solo—”Dedicatory Hymn,” by Mrs. L. A. Bishop; Solo by Mr. Mack Jackson; and Message of Dedication by The Pastor.

(As a point of historical reference, it can be noted that this service occurred just five days prior to the assassination of President John F. Kennedy in Dallas, Texas.)

A little over three years later, on Sunday, December 25, 1966, Christmas Day, the Bradley Baptist Church gathered to say goodbye to the 1903 sanctuary.

“A Convocation of FAREWELL

The third page of the program for this event contained a brief, but very useful history of the various buildings of the Church at that time.

“BRIEF HISTORY OF OUR CHURCH BUILDINGS.

The spiritual progress of almost any congregation can be measured by the facilities it dedicates to God.

This Church was organized on Wednesday, July 30, 1902.  The meeting place was a cottonseed warehouse where Tylers [sic] store now stands.  On Friday, August 1, the church elected a Building Committee and instructed it, “to take charge of Building Funds, purchase a church site and have church built.”  The committee was composed of the four male members of the church plus Dr. J. F. McKnight and Mr. J. B. Herndon.  This Building was completed in 1903.  It is this building we are meeting in today.

Due to the growth of our Sunday School, rooms were added to the auditorium sometime between 1923–1929.   With still more room required an educational building was erected in the early 1950’s.

In 1963 our new Auditorium was built and dedicated.  On January 1, 1967 we enter our new Educational Building.”

For those who may not be completely familiar with which building is which, in the color picture of the three buildings in the July 9, 2008, post on this blog, they are, from left to right:  1966/1967 educational building; 1963 sanctuary; early 1950’s educational building.

And for the benefit of anyone who may demand equal time, the next post on this blog will deal with some of the historical aspects of the Bradley United Methodist Church.  If any readers have information they would be willing to share with this site’s other readers on the history or buildings of any of the other churches in the Bradley area, I would be most interested and appreciative.

The image below, courtesy of Mrs. Marjorie Bishop, shows the Bradley Baptist Church after a snowstorm in 1960.  Following that image is a picture taken from approximately the same place and angle on the hot summer afternoon of July 6, 2008. 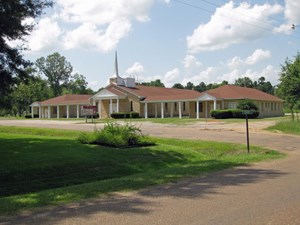 As is apparent, the colonnade between the educational building on the right side of the 1960 image was severed, then reattached to the new sanctuary when it was completed.

Sometimes history is right out in plain view, staring us in the face, and yet we seldom notice.  One example is cornerstones.  Although it is now partially obscured by a shrub, the cornerstone for the present (1963) sanctuary is shown below: 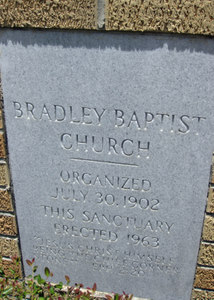 BEING THE CHIEF CORNER

The building on the left side of the current (color) photo was completed in 1966.  Below is an image of its cornerstone:

“BUT GROW IN THE GRACE AND

KNOWLEDGE OF OUR LORD

There is an enclosed hallway between the rear (north) end of the 1963 sanctuary and the 1966 building which also has a cornerstone/commemorative marker, shown below:

Again, thanks to Mrs. Marjorie Bishop for the use of the two black-and-white photos.