Below is a photo of one of those Bradley football teams, probably in the early 1930s.  The tall young man in the back row, second from left, with his left hand on his hip is Ralph C. “Bruz” Hamner.  If any reader is able to identify any of the rest of these formidable gridiron gladiators, it would be much appreciated. 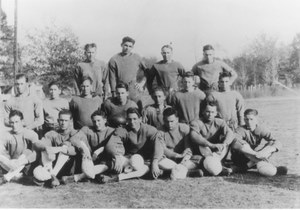 Shown below is an announcement of a game against Lewisville.  A date and time for the game are given, but the year is unknown.  While this may appear to be a handbill which would be posted on a utility pole, or something similar, it is actually a small card about twice the size of today’s business cards. 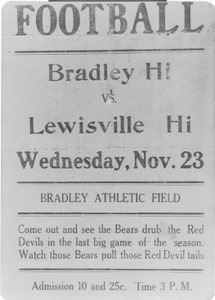 Come out and see the Bears drub the Red Devils in the last big game of the season.  Watch those Bears pull those Red Devil tails.

As for the eventual fate of the 1930s-era football program, I’ve heard tales of a bus or auto accident which injured some of the players on the way back home from an away game, causing the cancellation of the remainder of the season.  I don’t know what year that happened, but apparently the program was not resumed in the following year.