Shown below is an image of the Bank of Bradley portion, mostly, of this building, taken on an overcast winter’s day in 1975, three years before it was demolished:

And here is a photo taken much earlier in front of the Bank, showing the lettering on the windows: 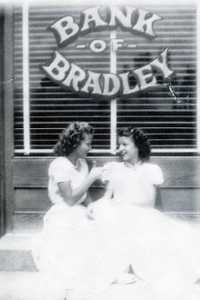 The two young ladies in the photo are Thomasene Jester and Ruth Joy Jackson.  The photo is courtesy of Mrs. Marjorie Bishop.

Two items from the old Bank of Bradley are now in the Cochran museum:  the “Bank” sign above the front door and part of the door to the vault, which was mentioned in the article in the previous post on this site.

Incidentally, Jack Meek, who was assistant cashier at the time the Bank was robbed in 1938, gave a newspaper interview in 1990 which casts doubt on part of the “Big Store No More” article.  According to him, the robbers forced him into the vault, but he was able to release himself before firing on the robbers as they made their escape.

This entry was posted in Buildings, Businesses and tagged Bank of Bradley. Bookmark the permalink.