Sometime in the early 1920’s (probably 1924), Frank Cochran, Sr., resigned his position at Holland Hardware Co. (see the post from October 8, 2007) and decided to go into business for himself.  The following photo shows “Frank M. Cochran Hardware Co.” as it looked about 1928 or 1929.  And, yes, for those of you who are wondering, the boy on the horse is, indeed, Frank M. Cochran, Jr.  A close look at the right-side window pane reveals a gentleman standing inside the building wearing a white or light-colored shirt and a tie. 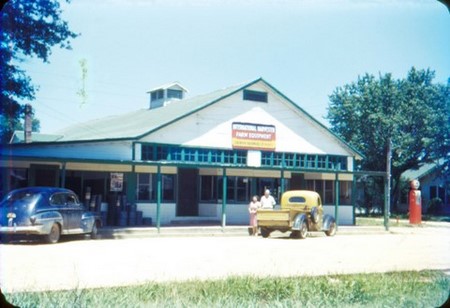 The sign on the front says “International Harvester Farm Equipment” and “Cochran Hardware Company.”  The two people standing beside the yellow truck are probably Frank Cochran, Sr., and Edith Cochran, a distant relative who worked for him for slightly more than ten years.  The spot in the upper left quadrant of the picture is simply deterioration of the original slide film photo.  The poster just to the right of the blue car is probably some sort of patriotic exhortation, i.e., urging the purchase of war bonds or something similar.  Note that, even though this photograph is taken approximately fifteen years after the first photograph, the street is still unpaved.

Most of this building was demolished in 1964, but the left side one-third still stands today.  The lot on the right of the picture, approximately where the gasoline pump appears, is now occupied by the Walnut Hill Telephone Co. building.

This entry was posted in Buildings, Businesses, Photos--old and tagged Cochran Hdwe. Bookmark the permalink.